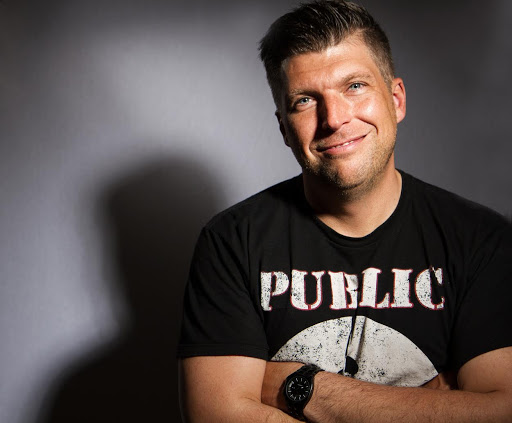 The self-proclaimed leader of the Sweater Vest Army bursted onto the stand up comedy scene in Los Angeles in the summer 2004 and hasn’t looked back since. His famous trademark outerwear has gotten him national recognition, and even publicly acknowledged by former Ohio State Buckeyes Football Head Coach and original Sweater Vest donner, Jim Tressell himself.

Chad Zumock is a proud 2.4 GPA General Studies graduate out of Kent State University, the same University that has produced famous comedians such as Arsenio Hall, Steve Harvey, and Drew Carey. He captivates audiences with his high energy humor, brutal honesty of his life, and quick-slacker wit. His likability is what connects him with all kinds of people and makes him a strong draw for all over the country, and also a strong social media presence.

His stand-up comedy has led him to appearances on the Artie Lange Show, Bob & Tom Show, Spike TV, Cinemax, E! numerous low budget-awful commercials, and was even a writer on the 2006 Comedy Central Roast of William Shatner. In 2012 he released his Top 20 iTunes ranked comedy album “Adventures in Argyle” which also can be heard on Sirius XM Raw Dog and Pandora Radio.

For Cleveland, Ohio audiences, Chad was an everyday voice on the legendary 100.7 WMMS for over 3 years taking a drive time talk radio to number one in several key demographics. He was also correspondent for Tailgate 19 during the 2011 Cleveland Browns season and was honored by the NBA’s Cleveland Cavaliers franchise in 2012 by having “Sweater Vest Night”

Chad’s Podcast “The Sit Down Zumock Podcast!” has over 17k subscribers, 10k downloads per week and can be found on iTunes and Stitcher. www.sitdownzumock.com

He hopes his stand-up comedy will one day lead him to his dream job of being in “The Beastie Boys” by replacing the late, great Adam “MCA” Yauch R.I.P. or a roadie for Motörhead.